In 2014, Cincinnati had several events and exhibitions to celebrate this memory. The Cincinnati Opera performed the Pulitzer Prize winning “Silent Night” in July and the Cincinnati Freedom Center currently has an exhibit “Cincinnati’s Soldiers- Men and Women in the First World War”.

Hamilton County Memorial Hall was only ten years old when Cincinnati welcomed home the veterans of this war at its end in 1918. Memorial Hall was created for veterans to congregate and share their war experiences, so it would have been a hub of activities at this period of time.

There were significant events held nearby to Memorial Hall’s “Over the Rhine” home including a traveling exhibit, entitled The Allied War Exposition, held at Cincinnati Music Hall in December 1918.

During this holiday season, reflect on all of the men and women who have fought for the US in a war to insure the freedoms that we enjoy. Hamilton County Memorial Hall is a lasting monument to these individuals and a hidden gem in the Cincinnati culture and arts community!

Lt. Albert Franklin killed in 1952 in the Korean War effort

The words “I regret to inform you” is the beginning of a conversation we will not enjoy and for the members of the American Gold Star Mothers, it has meant that their child has died in active military duty.

In the basement of Hamilton County Memorial Hall there is a room filled with remnants of many of the organizations that have been housed under its roof over its 106 year history. One of these artifacts is a scrapbook of the Hamilton County Gold Star Mothers from the 1950’s. This group met at Memorial Hall for their regular meeting during that period of time.

On Veteran’s Day, we celebrate all of the people that have taken the military oath and have served the United States of America. Some of those people return from war and others don’t.

The American Gold Star Mothers, Inc. was formed on June 4, 1928. Membership in the Gold Star Mothers is open to any American woman whose child has died in the line of duty of the United States Armed Forces. Just as when it was founded, the Gold Star Mothers continues to concentrate on providing emotional support to its members, doing volunteer work with veterans in general and veterans’ hospitals in particular, and generally fostering a sense of patriotism and respect for members of the Armed Forces.

In 1950, June Smith Bramlage of Hyde Park got one of those calls about her son, Powel Crosley IV, the oldest grandson of Powel Crosley, Jr. Powel IV was killed in an ambush in North Korea on October 2, 1950.

Since opening its doors in 1908, many performers and speakers have graced the stage of Hamilton County Memorial Hall. The only problem is we don’t remember many of them and our historical records are scarce.
There have been some exciting performers over the past decade including Patti Smith, Phillip Glass, Bill Frisell, Steve Reich and Sufjan Stevens to name a few. Even in the past month, we have hosted TEDXCincinnati and FotoFocus with its headliner, film director John Waters.
We also know from reading an old copy of an Enquirer article from 1908 that the first performer during the dedication of Memorial Hall on June 13th, 1908, was a fellow called “Smittie’s Bugler” performing a ‘bugle call.’ The speakers that day included Ohio Governor, Andrew Lintner Harris, and US Congressman General Charles H. Grosvenor.

What happened between these dates is a little foggy.
Records of all the speakers and performers of Memorial Hall from 1908 until 2007 have virtually vanished. We know that The Cincinnati Community Art Theater used Memorial Hall for its home in 1917-1918 and US Presidential candidate, John McCain, stopped by for a rally in 2008, but we are hoping to fill in the blanks.
If you know or have records of performances on the stage of Hamilton County Memorial Hall, we would love to hear from you. We hope you can help us keep this important Cincinnati history alive! Please send your information to info@cincinnatimemorialhall.com

I just found this lovely postcard from 1907. Great view of Elm Street from Cincinnati Washington Park! Hamilton Country Memorial Hall would be just off view on the left and in 1907 would be is some stage of construction. Memorial Hall was completed in 1908.

Note the two statue on each side of the pond. Those are currently directly across Elm from Memorial Hall. 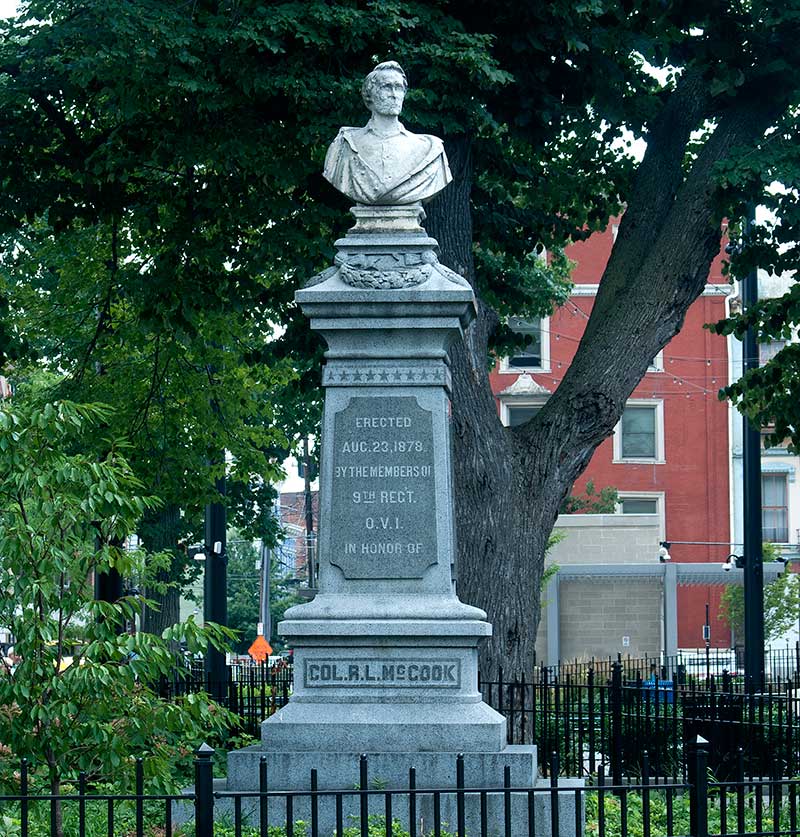 One of the statue is of Colonel Robert L. McCook who led the Ohio 9th infantry in the Civil War. This group of volunteers were entirely made up of German immigrants living in “Over the Rhine”.

Flat roof- check, symmetry- check, classical order and harmony- double check. Those are some identifying details of a Beaux-Arts style building and  Hamilton County Memorial Hall is considered to be Cincinnati finest example of that architectural style. While no evidence is found to conclude if Memorial Hall’s designers, Samuel Hannaford and Sons, attended the Beaux-Arts rich 1893 Columbian Exposition in Chicago. The influence of that event and examples of that style is well represented in Cincinnati.

So what defines Beaux-Arts architecture? 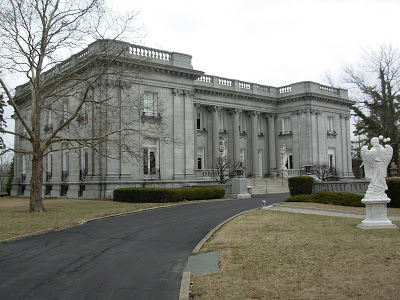 Here is a list of the defining details of the Beaux-Arts architecture: A flat roof, raised first story, grand entrances and staircases, arched windows, pediment doorways, eclecticism (the combination, in a single work, of elements from different historical styles) symmetry, statuary, sculpture, murals, mosaics and classical architectural details including balustrades, pilasters, garlands, cartouches, with a prominent display of richly detailed clasps, brackets and supporting consoles. Well, Memorial Hall gets a check mark in that entire list of defining characteristic!

Other notable Cincinnati Beaux-Arts buildings include the Cincinnati Art Museum, the Western and Southern Life Building, the Gwynne Building and Laurel Court in College Hill.

Hamilton County Memorial Hall was completed in 1908 and dedicated to Hamilton County’s “soldiers, sailors, marines and pioneers” on June 13th of that year. By 1920, the Beaux-Arts style fell out of fashion and was replaced by Art Deco as the favored institutional style.

Hamilton County Memorial Hall could be considered Cincinnati’s Military Hall of Fame. This incredible 1908 Beaux Art structure houses a collection of interesting artifacts from Cincinnati’s military history. One of which is wood framed bronze plaque that hangs high on a wall near the front entrance.  Who is this man and why does he hang in a place of honor?

The man captured in bronze is Nicholas Longworth Anderson, Colonel of the 6th Ohio Volunteer Infantry (also known as the Guthrie Greys). Born in Cincinnati on April 22, 1838, Nicholas’s parents were Larz Anderson and Catherine Longworth Anderson. His grandfather on his mother’s side was Cincinnati’s sparkling Catawba producing, Nicholas Longworth. On his father’s side, his grandfather was the Revolutionary war hero Colonel Richard Clough Anderson.

Nicholas graduated from Harvard in 1858 and volunteered to join the militia named the Guthrie Greys when President Lincoln called for 75,000 men to serve the Union’s efforts. With his father’s connections to Governor William Dennison, Nicholas could have joined the Army with a Colonels commission. Instead, he joined the newly formed Ohio 6th as a private and proved himself over his three years of service.

Before leaving Camp Dennison, the training grounds for the regions Civil War bound men, Private Anderson was advanced to Lieutenant Colonel. In the last two years of the Civil War he lead the Ohio 6th as its Colonel. Around the border of the plaque  lists the battles that he fought. These battles include Shiloh, Chickamauca, and Stone River to name a few.

After the war, Nicolas Anderson married Elizabeth Coles Kilgour (of the Hyde Park Kilgour Family) and had three children, Elizabeth Kilgour Anderson, Carl Kilgour Anderson and Larz Anderson III. Larz Anderson III became a Washington diplomat and married Isabel Weld Perkins in 1896. The palatial house they built together on Embassy Row in DuPont Circle, Washington D.C. is now the home of the Society of Cincinnati, is the oldest private patriotic organization in the United States.

Nicholas Longworth Anderson was later honored by an appointment to the brevet grades of brigadier general and major general of the Civil War volunteers.

Next time you are visiting Hamilton County Memorial Hall, make sure to tip your hat to one of the most esteemed members of Cincinnati’s Military Hall of Fame, N.L. Anderson

Max Simon is a historian and an event manager at Hamilton County Memorial Hall. While spending time around this 1908 Beaux Art building, he started noticing the coincidence of items around the hall occurring in multiples of nine.

There are nine virtues molded in plaster above the stage, nine arches surrounding the main floor of the auditorium, and nine feature windows on this floor to name a few. 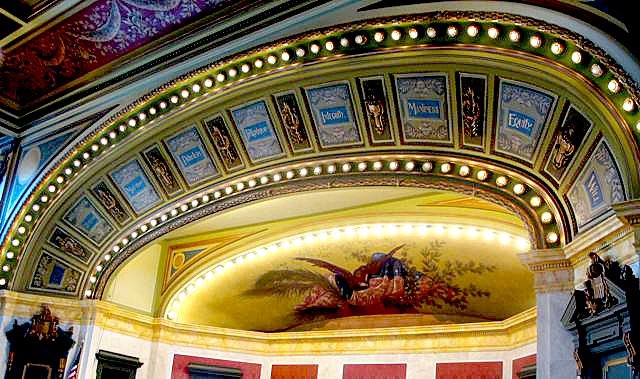 Above the Cincinnati Memorial Hall Stage

Max believes that coincidence of nine is not a coincidence. He feels that these the multiple instances of nine were a “hat tip” to the Ohio 9th Volunteer Infantry. The Ohio 9th (also called the Die Neuners due to it makeup of mostly German immigrants) was considered by historians as the most successful of Cincinnati’s Civil war regiments.

During the dedication of Hamilton County Memorial Hall on June 13th, 1908 Ohio Governor, Andrew L. Harris spoke to the packed house. He applauded the 8000 volunteers from Hamilton County Ohio that fought in the civil war and named the notable regiments of the Fifth, Sixth, Ninth and Tenth. In the article published the next day in the Cincinnati Enquirer, he was quoted as saying went on to say “A great body of men that was recruited by the gallant Colonel Bob McCook of over 1,000 Germans….. The Government could not furnish uniforms quick enough for these enthusiastic patriots and they marched at first in the white garb of the Turner Society”

Imagine the pride of the grizzled Ohio 9th veterans looking around the auditorium during the dedication ceremony and counting to nine.

This was the battle cry that was published in Joseph Pulitzer’s New York World and William Randolph Hearst’s New York Journal to encourage the U.S.’s involvement in what became the Spanish- American war in 1898. 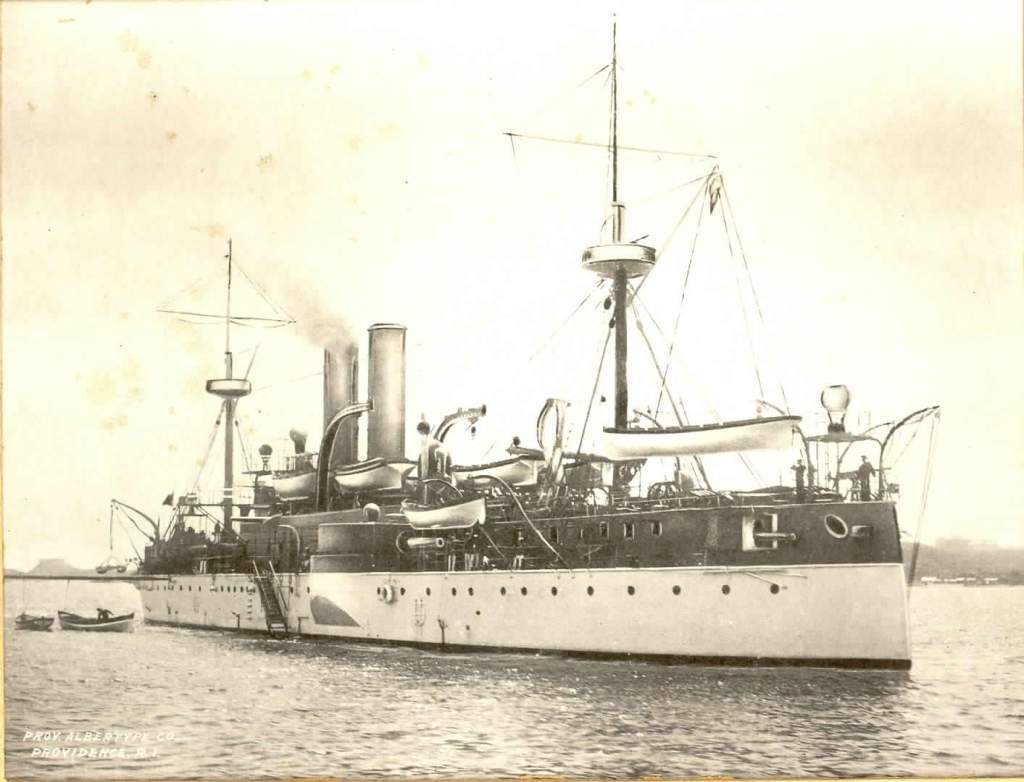 The USS Maine in Havana harbor

In the center lower hallway of Hamilton County Memorial Hall there is a plaque that was made to immortalize the steam powered armored cruiser commissioned by the U.S. Navy in 1895. When built, this warship was considered to be the state on the art in armor and armament. The Maine was sent to Havana, Cuba in January 1898 to protect US interest during the Cuban War of Independence. A mysterious explosion on February 15th, 1898, destroyed the battleship and killed 266 men that were aboard.

The plaque in Memorial Hall was sculpted by Charles Keck in 1913 and is cast from the metal recovered the wreckage of The Maine. Several of these plaques are known to exist including the one in the side of the USS Maine Monument in the southwest corner of Central Park in New York City.

Interested parties could receive these plaques for free as this July 6th, 1914 advertisement in The Independent states.

You can find this plaque when you visit Hamilton County Memorial Hall in the first floor hallway on the left hand side.